Don states that were participating in a turning point in human history, we can rebuild and transform stalled institutions. Rob McKewen from Goldcorp is cited as an example, he takes over a 50 year old gold company, and his geologists can't agree where to dig.

He took his geo data and published it, holding an Internet contest called the Goldcorp challenge, offer half a million in prize money to tell him where to dig. His company is now worth 33 billion.

Rob thought differently about how to create success. He peered out the data, and the winning company was actually a computer graphics company.

By embracing a whole new modus operandi Rob achieved something amazing. This was the lead story from Wikinomics... It was published, and then the US economy melted down.

Don claims that we are on the cusp of a fundamental transformation that has been touched off by the downturn. Plug for his new book, Macrowikinomics. We are rebooting our institutions, and are previous need to have everything in mass... Communications, industry, energy, transportation, health care, and regulation as some of sixteen Don cited. 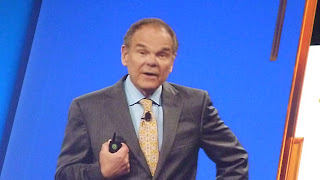 One of Four drivers of change is technological innovation, the pervasive ambient technology rising and our culture adopting and adapting because of it's convenience.

The four drivers are The technological revolution, the net generation, the rise of collaborative communities, and the economic revolution.

Growing Up Digital by Don Tapscott.

social media drops the transaction cost of dissent and rebellion, demonstrated by the uprisings in the middle east.

Were experiencing a crisis in leadership globally and corporately, but we can choose a new and brighter future.

Example cited of Starlings murmuration, when the birds function openly and collaborate. Can we as humans, go beyond sharing knowledge and data, to sharing intelligence.

- Posted using BlogPress from my iPad