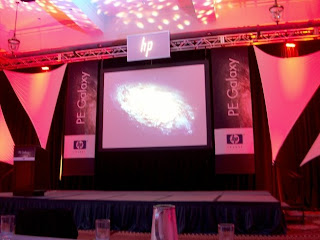 St. Patrick's Day finds me back in New Orleans, and back at the HP Software Partner Enablement Galaxy (PEG) for ramping up my Ops Centre & Site Scope skills/knowledge.

So first off, Happy St. Patrick's day to everyone!

This morning started off with the general session from 8:00 to noon (well, 6:00 to 10:00 according to my body) but despite the fact that I don't handle jet lag well, I was able to be completely attentive. Steve Myers from HP started things off with over-views and clarification on HP's bail policy for people who decided to go out to Bourbon Street. Steve also shared some other interesting facts about PEG in general such as:
Jim Murphy came on stage to discuss the vivit training lined up for HP Software Universe in June and encourage everyone present to consider attending those sessions.

Steve finished up his sessions by letting us all know that PEG will be here once more, the week of Oct 6 2008.

Next up was Mike Procopio from HPSW to address the group on the HPSW Network Lifecycle Management initiatives, and how HP wants partners engaged in that. Mike went through the standard aligning IT to business pitch, and discussed the concern of CIO/CTOs of keeping the network operational, meeting SLAs, and cost-effective. An interesting factoid he brought up was an estimate of average network downtime impacting business bottom-lines at $70,000/minute. I'm thinking this is an average across Fortune 500s, but interesting factoid none-the-less.

Mike talked in depth about NNM8i, the Performance iSPI for NNM, change & config management, and AlarmPoint Express. Gotta say I've never personally been a huge AlarmPoint fan, but I will make the time to take a look at the new offering bundled with full purchases of NNM8i. Stay tuned for a review at some point.

A major point Mike made that clarified some confusion for me was that Performance iSPI is NOT intended to replace OVPI (or HP Software Performance Insight), but instead it appears to me to be more like a "pay for" integration piece that gives you "OVPI light" integrated into your NNMi architecture. Again, more on that topic as things develop!

Chuck Fugee & his team of SAs were introduced to everyone. Nice to meet them. :-) 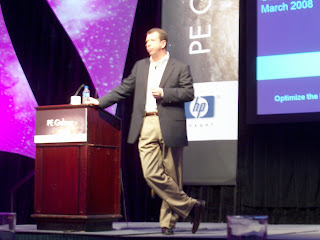 Next up was Scott Strubel. I haven't had a chance to talk to Scott for a while; not surprising because he always seems to me to be one of the busiest execs in HP - although if you can find him he always does make some time to talk. Scott addressed us partner organizations about ways that the HP sales force and partners should be working together, the state of BTO (Business Technology Optimization) solutions today, what HP needs from the partners in as far as solution offerings go, and some re-iteration around HPSU in Vegas, and the Partner Summit to be held there.

Personally, I've never been a big fan of the Partner Summit when I've attended HPSU or OVFI conferences. It's nice that the big partners get their pats on the back & trophies, but the info there I find really oriented towards software sales and not implementation guys & gals. Give me case-studies or in-depth techie sessions anytime!

Scott is planning on being in Central Canada next week so heads up HP Canada Software Sales folks!

Scott made reference to the number he mentioned last October, of FTE and professional services consulting hours that HP software sales were planning on driving to the partner base. Then he informed us that it looks like HP is tracking to exceed those numbers. Good news for the partners! Well, the ones that HP is working actively with anyhow.

The last item from Scott that really caught my attention was the mention of HP shifting some percentage of it's software sales attention towards the upper end of the SMB market. There wasn't a lot of info on that, but as it's a space that Tsunami actively engages in I must admit that piqued my curiousity - More info please, Mr. Strubel! Perhaps my channel manager can update me after he's had his visit with Scott next week. ;-)

Last up was Victor Fadool from HPSW Professional Services. Victor spoke on a number of items, but I must confess that I glazed over a bit as it was very US oriented, and rarely discussed how the Canadian organization might find ways to work better with the Western Canadian partners... It was interesting to hear him make mention of work done in conjunction with some mysterious un-named partner at BC Hydro. Apparently Service Management work. Sounds like a good story, if the work has been as successful as it was promoted as being - so mystery partner(s), here's your invitation to contact me for an interview about the project, and give a presentation to our Vancouver local chapter of Vivit!

So that was the general session and the morning of DAY ONE. We next went to lunch where I was able to briefly chat to Scott Strubel and get a little more detail on what's up for Canada (I'm not posting that though, it'll be a suprise for my Canuck counter-parts!).

The afternoon got us started on our break-out sessions. Stay tuned for updated posts on those. I'm taking the OVOW8/SiteScope session, and I'll post all the late-breaking news I get from that. I know my customers are eager to hear more about OVOW 8.
Posted by Mr. Kennedy at 8:11 AM

Thanks for writing this blog, loved reading it