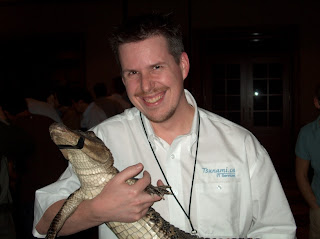 Well, we've completed the third day here in "Nawleens" and my take is that PEG this Spring has been better than last Fall. I know Steve Myers took quite a bit of the feedback from the fall session to heart and it helped improve the sessions we had.

I've been taking the OMW8/SiteScope session, and we've completed the OMW8 sessions led by Lars Droeger from HPSW Germany. Lars was able to give a great hands-on experience as we worked through VMs of OMW. I stayed late last night to tackle some extra labs, but have felt that I've gotten quite a bit out of that. This afternoon we tackled DMA (Dependency Mapping Automation) which is effectively the automated connector between OMW8 and uCMDB. Dave Trout from HP was leading the DMA sessions. Unfortunately for Dave he was trying to get us to use lab VMs back at Fort Collins but the bandwidth out of the hotel was so limited that RDP sessions had screen refreshes that just c-r-a-w-l-e-d. I made sure to pass that feedback to Steve tonight.

Speaking of tonight, I should mention that Steve Myers sure can throw a party. It was the Riverboat Gambling Theme Party tonight for everyone attending and Steve & Opus (the conference organizing company) put on a fantastic dinner. There were a few tables with different gambling games, a live band playing Dixieland, a couple of gents from the Bayou with three 'gators to play with, and lovely young show-girls to greet us at the doors. Not to mention the open bar & fantastic variety of food. So, my thanks to everyone involved in putting that on!

Back to the learnin' an' stuff. I was able to get a lot of knowledge out of the DMA session with Dave Trout. HP's uCMDB is a powerful tool, but I'm thinking they may have it priced out of reach for most. Some of the underlying technology is impressive though, I was particularly impressed with the elegant "Smart Message Mapping" solution for replacing SPI discovered service objects with objects/relationships from the CIs in the CMDB. It's powerful, but a pretty expensive solution. Any of my clients can contact me for ball-park pricing. It does seem that the messaging from HP is that uCMDB is going to be core/central to all their major ESM offerings.
Posted by Mr. Kennedy at 7:10 PM